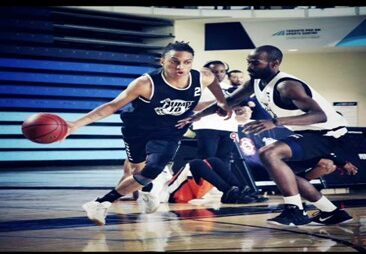 A Journey Through Canadian Basketball

An Interview with Jamoi Smith

What was your most memorable tournament?
I have so many memorable moments being involved in such an amazing sport like basketball. The tournament that I remember the most was 100% in college. Fortunately for me I continued basketball after high school and played for George Brown College in Toronto. I had my best and worst times playing college basketball. At the time, Humber College was number one in all of Ontario for basketball and they hosted a tournament every season. This was most memorable for me because I really wanted to go to that tournament and make a name for myself. Unfortunately I was sick with a cold and had injured my ankle in practice a couple days before. I had dedicated too much work and time to not play in that tournament, so I forced myself to play. For that very same reason is why that tournament is the most memorable. It was a shift mentality-wise.

When you put your mind to it, the body will follow. From that tournament on, I always told myself I can, never I can’t.

When did you start playing basketball?
Basketball was never my first choice of sport. It wasn’t until I was 9 years old and I was living in Homestead, Miami Florida I said hmm, let me give this sport a try. Before basketball I was a soccer player but that didn’t last very long. Fortunately for me my father had put me into a basketball league at the local YMCA. This would be my first time playing basketball. All I could remember is our team sucked so much but I knew this would be the start of a new found love for the sport. Fast forward a year later in Toronto I was ready to play for a real AAU Team. Little did I know that this would be the start of a basketball journey I could never forget.

How much time and commitment did it take to improve your game?
When I originally fell in love with basketball it was all I wanted to do. I couldn’t stop committing myself to the game. In highschool I began to take basketball seriously and thought to myself “Let’s see what I can do with this.” My goal was to be the top player on the team. I wanted people to know me for basketball, so I took it upon myself to make sure I was consistently putting in the time. Whether it was practice for school, practice for AAU or just playing in gym class or pick up games after school. I always made sure I committed the time. If I couldn’t play basketball, I was studying some of my favorite NBA players, watching videos on youtube for take-aways to add to my game. The more you immerse yourself into your passion, the more real it becomes. At 16 years old, my life had just become about basketball and school.

How did basketball develop your work ethic?
Basketball helped shape the man I am today. It showed me discipline, consistency, and a great desire to want to better myself in my everyday life. Generally, if you have passion you will be willing to put the work in. Basketball helped me realize talent can open the doors, but the hard work behind it is what keeps you around. While I was in highschool I wanted nothing more than to be a part of a basketball roster post secondary. College basketball demands a lot more out of you than highschool basketball – practicing almost everyday, making sure you get your workouts in the weight room, and on top of all of that also ensure you’re eating properly. In the long run it only benefits you and the team. Juggling school and basketball really shows you how to prioritize what you need vs what you want. For me basketball was all I wanted to do, but in order for me to do that I had to be disciplined with my school work. Developing a work ethic wasn’t hard once I knew what had to be done.

How did the various levels of basketball differ in Canada?
Basketball in Canada has a lot of ups and downs. It is a great place to chase after your dreams no matter what that may be. The only problem is getting yourself into the right environments to get to the next level. It wasn’t until after college I started taking matters into my own hands with basketball. After I graduated I had the opportunity to play semi pro basketball for a league called Megacity (Onpoint). There are leagues in Toronto that gives you the opportunity to showcase your skills in front of scouts and create yourself a stat sheet. From there I had the opportunity to try out for Raptors 905 ( Raptors G league team) and had the opportunity to play for TeamCanada 3on3. I’ve put myself into a lot of situations that I knew could either get me to the next level or where I could learn from coaches and peers that have my best interest at heart. Your mentality starts to really take a huge toll in your basketball career the more opportunities you get to showcase what you can do.

You must always be willing to learn and to grow. The higher up in basketball and more opportunities you receive, coaches and scouts want to know that they are working with someone coachable and has a good mentality for yourself and for the team. Various levels require different amounts of growth physically and mentally.

What was your biggest disappointment?
One thing that I learned with the sports industry is keep your head down until it’s time to show the world what you’re made of. Meaning keep grinding until it’s your time to shine. I’ve disappointed myself on many occasions because I thought I was ready but in reality I wasn’t. Yes, my skills were there and I was working on them constantly and yes, I’ve had a lot of experience in the industry but something else was missing. You are your number one supporter. If you don’t believe in yourself to the fullest extent, then how would you expect someone else to do the same? That was my problem. I doubted myself a lot and it messed up opportunities that I could’ve created into something bigger. Doubt only became a thought in my mind when I didn’t get picked for certain teams, got traded or got cut from teams. The best way to overcome those obstacles is to refer back to all the wins you’ve had. Whether it was in your passion or just in everyday life, you will be tested. I learned not to come down on myself so hard and just keep moving forward.

What role did your parents play during your basketball career?
None of this would have been possible without my parents. They’re the support, the hype team, the motivators, and my backbone. I will forever be grateful to my parents for helping me become the best I can be. I wouldn’t have been able to go play and get the experience I got in this industry if my parents didn’t put the money and time into me. My father was like my at home coach. He used to bring me to the local gym and make me run a mile every time before starting any sort of workout. I hated running so much on the treadmill but it instilled determination in me. A force so strong that I actually started doing that for myself when I started taking workouts into my own hands. My father always instilled discipline in me, showed me that if you want certain things, you gotta put yourself into a position to chase it. My mother always reminded me during this basketball grind to never to lose sight of my goals. Whenever I doubted my abilities my mother would say “But why? Look how far you’ve made it”. She always kept the positivity no matter what. I’m so grateful for the support system I had while I was pursuing my dreams.

What was your biggest win?
The more you lose the more you’ll appreciate the wins. Losing is so much easier than winning, but I never consider it as a loss but instead a lesson. My biggest win will forever be in my heart not only because of the feeling but because I feel like I’ve learned the biggest lesson of all.

Knowing what it takes to be a winner. When I started playing for the semi- pro league for Megacity, I got drafted to a team called “Grind time”. I had played one game with them, and then the general manager of the team traded me. I was so upset with myself, asking myself “Am I not enough?”. I wanted nothing more than to prove to the GM that he made a huge mistake. It was about a 5 month season. All I remember is that I used that trade as fuel and dedicated myself to becoming the best in the league. In the regular season I was only averaging 15.9 points per game. To be a top player in the league I needed to be better. In the last two months of the season were the playoffs. I became a different monster. I averaged 22.3 points per game and ended up bringing us to the championship game. What was very crazy for me was I played the team that I got traded from in the championship game. I ended up dropping 28 points and we won. This was a huge win for me because not only did I prove to the GM that he made a mistake, but also proved to myself with hard work and determination I could pull it off.
Although I wasn’t the top player in the league, it was satisfying knowing that we had beaten all the top players to become the top team.

What is one piece of advice that you would give to someone who has the same aspirations?
For the younger generation of ballers, or even just athletes in general, never stop chasing your dream! We only have one life to live, so live it doing what you want to do. If you have a support system don’t be afraid to ask for help. We aren’t perfect and nor does anyone expect us to be perfect. Just understand we can’t get anywhere without hard work and dedication. Commit your time and energy to your passion and you won’t be disappointed. I am excited to see what the next generation of ballers has in store for us.

Join The Financial Moment community. Together we can bring our financial dreams into reality.

We share weekly articles that provide money tips, inspiration and financial literacy for your children. Set up your path for your family’s success. Before you know it, you are changing, one Financial Moment at a time.

So excited for our conversation tomorrow! Join the

“I deserve it” the number one reason why we fa

Be Bold and go after your goals! Plan, Save and In

Reduce your speed and trust the process. Your time

This month we are back at it! Here are a few tips

© 2022 The Financial Moment. All Rights Reserved.